Honour Ice Cream have a history page with content on how the first soft ice cream vans were introduced to West Philadelphia in America. Two Irish brothers by the name of  William Conway and James Conway set out to the Streets of Philadelphia on St Patrick’s Day and gave out free green ice cream to all their  customers, the Company’s name was Mister Softee . 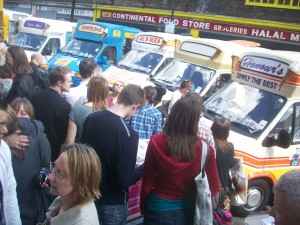 Honours Ice Cream and other vendors take part in The Ice Cream Orchestra in London on Sunday the 26th of April 2009, six ice cream vans were hired to take part.